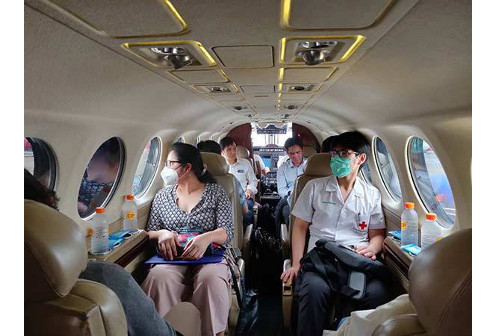 The Charoen Pokphand Group (CP Group) offered its support to the critical work carried out by King Chulalongkorn Memorial Hospital and the Thai Red Cross recently when it put on a specially chartered flight on an urgent medical mission on July 4th.  Operated by Siam Land Flying Co. Ltd., a subsidiary of the CP Group, the flight carried a team of doctors to Buriram where they picked up a heart, kidneys and eyes collected from local donors before bringing them back to Bangkok for use in vital transplantation surgeries.
Led by Doctor Pat Ongcharit, M.D., specialist in cardiothoracic surgery at King Chulalongkorn Memorial Hospital and the Thai Red Cross, the five doctors in the team were chosen for this critical mission because of their expertise in the field of heart, kidney and eye transplant surgery. The trip was a race against time to ensure that the organs from donors in Buriram could be brought back to Bangkok in time for use in various transplantation surgery procedures.
Mr. Greg Martin, CEO of Siam Land Flying Co. Ltd., described how the CP Group was acutely aware of the sacrifices made by medical staff during the recent Covid-19 outbreak. “The unprecedented situation means that many medical professionals are working tirelessly to ensure every minute of their time is given over to their humanitarian objectives,” he explained. This trip was no different in that regard as the team had just a 4-hour window in which to achieve its goal.
“As such, speed was of the essence in this case as the medical team had to cover a total distance of almost 1,000km on their round trip to Buriram from Bangkok, which is why only a privately chartered aircraft would do if they were to make it on time,” explained Mr. Martin.
“Siam Land Flying was grateful for the opportunity to play a part in supporting the work undertaken by the doctors of King Chulalongkorn Memorial Hospital and the Thai Red Cross in organizing a private aircraft, including a pilot unit, who ensured the medical team lost no time in getting to the donated hearts in Buriram for use in transplantation surgeries back in Bangkok,” added Mr. Martin.
The flight also carried a team of specialist kidney transplant surgeons to collect two donated kidneys, which were of the utmost value given that the Covid-19 pandemic had previously halted their efforts to take receipt of such critical donations. This specially chartered flight also enabled the collection of eyes donated to those in need. “In total, the donated organs went toward helping five patients who were in desperate condition, so we would like to extend our sincerest thanks to everyone who played a part in saving those patients by giving them a new lease of life,” Mr. Martin explained.
Doctor Ongcharit reported that the task of his team of doctors was to take receipt of the hearts which could then be transplanted into patients who had suffered heart failure. These donated hearts came from special cases whereby the patients’ brains had ceased to function, but the hearts were still working as normal, meaning they were suitable for donation. Such surgeries are only reserved for patients with no other options, although the most critical aspect is the transportation of the donated heart from the donor to the recipient, as this entire process must be completed within 4 hours.
“It is often the case that donors are located in faraway provinces – as was the case with those donors in Buriram today – so if we use other methods of transport such as motor vehicles or even regular chartered flights, the combined time of travel and surgery would be too long for the donated heart to survive,” explained Dr. Ongcharit. “We needed the fastest air travel available to make the return trip today, so Siam Land Flying put on this special flight for our team of doctors and nurses to travel to Buriram in order to take receipt of donated organs there.”
In addition to the usual factors that have to be overcome, the Covid-19 pandemic has led to a significant reduction in the amount of flights taking to the skies each day. “This was also a fantastic opportunity for our abdominal surgery team – who were unable to fly on other airlines – to join us,” added Dr. Ongcharit. “As such, we had 2 medical teams on board ready to bring the donated hearts, kidneys and eyes back for use in vital transplantation surgeries. The result of our trip was that we were able to successfully treat five patients who were awaiting new organs.”
Source: https://www.tnnthailand.com/content/46388